A fox-like dog who is lively, agile, quick and light on his feet. Finnish Spitz is a breed of dog originating in Finland. The breed was originally bred to hunt all types of game from squirrels and other rodents to bears. In America, Finnish Spitz is primarily companion dogs. In their native Finland, however, they're still used for hunting, mostly for a large game bird called a capercaillie and for black grouse. Known as the "barking bird dog", the way Finnish Spitz hunt is unique. He runs ahead of the hunter until he finds a bird. Then he follows the bird until it settles in a tree, and attracts the bird's attention by running back and forth under the tree, wagging his tail. It's thought that the bird is lulled into a sense of security by the dog's movements, at which point the Finnish Spitz begins to bark, softly at first and gradually getting louder. 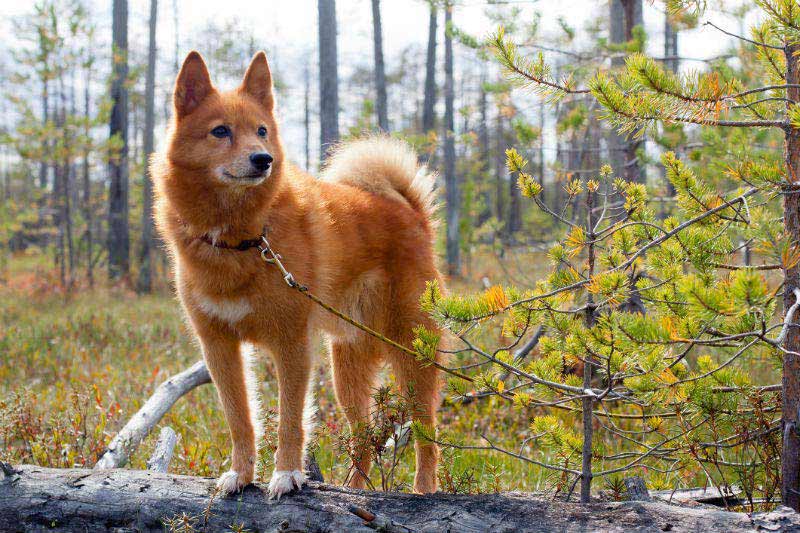 The Finnish Spitz typically weighs between 23 to 36 pounds and 15 to 20 inches in height. He loves children and gets along with other animals, especially when he's been raised with them. On the down side, he's an independent thinker and can be a challenge to train. He may not be mentally and emotionally mature until he's three or four years old. Finnish Spitz is a lively and intelligent companion. He is a good companion for an active family and gets along well with children. He is a good watchdog who can protect his families, but he rarely shows aggression unless it's warranted. Finnish Spitz doesn't like being left alone. If you leave Finnish Spitz alone for too long, he will probably engage in his favorite activity — barking! His next favorite activity will be hunting for prey, which can include digging for mice and other burrowing animals or chasing squirrels and birds. This is a breed that requires a knowledgeable, active owner and understanding neighbours. Training these independent, strong-willed dogs can be a challenge. Finnish Spitz is best trained with a soft voice and touch. His intelligence makes him become easily bored with repetitive training, so keep your training sessions short.